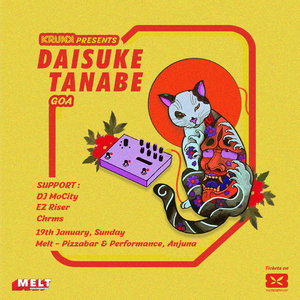 Born in Baghdad, raised in New Delhi, and now based in Dubai, Mohammed Uraibi Abood (aka DJ MoCity) is a music entrepreneur and DJ with a passion for authentic music from all around the world. Since his early days as a hip-hop loving teenager in New Delhi, Mohammed has grown into a highly experienced and respected musical tastemaker whose personal choices and interests have illuminated the way for thousands more to follow. His dedication to his vision and unmatched effort towards realising it have made him a key figure in the development of the independent music scene in India and Dubai.

Mohammed has achieved a remarkable amount in the last few years. In 2009, he founded and self-managed Reggae Rajahs (India’s first reggae sound system) into national prominence. He
then expanded into events by creating and running a successful series of club nights such as Delitronica, The Future and Imported Goods, which set the benchmark for club events in India at the time. He was then invited to create and curate stages for major festivals in 2012, such as NH7 Weekender (20,000 attendees) and Sunburn Festival (50,000 attendees). Upon moving to Dubai in 2014, Mohammed established ‘Motellacast’, a podcast that features forward-thinking music that was created due to a lack of alternative music on the local radio. His efforts as a radio host were validated when he was invited for a guest spot on NTS-Radio London. He then co-founded ‘The 264 Cru’ a record label and diverse collective of DJs, artists and creative individuals whose shared goal is to help Dubai’s nascent art and music scene find it’s footing.

Since 2015, he has also been a booking agent for Dubai-based OHM Events. Over the last year, OHM Events has hosted artists such as Deadalus, Jordan Rakai and Fatima &amp; The Eglo Band, and they take great pride in being part of the change that Dubai’s music scene needs.

Mohammed’s musical identity is derived from his own personal heritage and multicultural experiences living all around the world. While proudly Iraqi by heritage, he has been unable to engage in any music-related activities in his home country due to its volatile political situation.

Rather than see this as a disadvantage, Mohammed has chosen to see this as an opportunity to truly be a citizen of the world.

At this moment, Mohammed is busy with bookings for Sole DXB 2016 and planning his 2016 European tour, which will feature performances at Dimensions Festival, Uprising Festival and various club show.

chrms (pronounced "Charms") is the alias of young electronica producer Veer Kowli. Veer is based in Mumbai, India.

Inspired by the likes of Flume, Mura Masa, Odesza and Mr. Carmack, he has been experimenting with design, film and music since he was 9. He aspires to create fresh sounds never heard before, merging indie dream-pop with all kinds of electronic music. Without restricting himself to any particular genre, chrms' sounds can vary from being super lush, chill and ethereal, to bass heavy.

He is currently working on finishing up his highly anticipated Debut EP - set to release in summer '19.