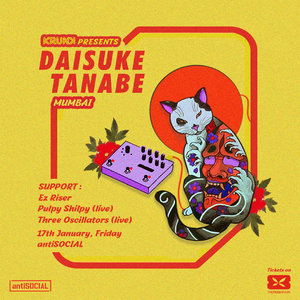 When poetess and producer Pulpy Shilpy released her first single “Kaadal Mannan” - a plea to break away from the medieval marital habits of her ancestors - Rolling Stone said she was at her “feminist fiercest”. A year afer, the feisty songstress has dropped her brand new gritty electro EP SLOUGH: “A wonderful sonic experiment that provokes a mind-bending, cathartic journey woven by glitchy sounds, 8-bit effects, and provocative wordplay and storytelling,” says Wild City!

Formed in 2015, Three Oscillators is a solo project by music producer Brij Dalvi.

Formerly a duo with Avit Rane, the sound of Three Oscillators falls under the realm of glitch, sci-fi influences and the future. Seamlessly shifting through genres within these attributes, Three Oscillators is a diverse mix of otherworldly samples and dreamy sounds. His DJ sets range from underground dance floor numbers to heavy bass and fast-paced beats.

Three Oscillators is also a part of jwala, an artist collective based out of Mumbai and Delhi.

The act has since opened for reputed international acts like Parra For Cuva, The Micronaut and Yosi Horikawa, and has played on platforms like Sofar Sounds and Magnetic Fields Festival. His music has been covered on reputed websites like Resident Advisor, COLORSXSTUDIOS and Rolling Stone India among others. 2017 saw the release of two EPs and a series of singles across various music platforms. The beginning of 2020 will see Three Oscillators release his newest EP "The Purge", themed on the idea of a post-apocalyptic world.