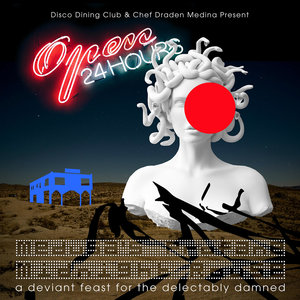 "You only have to look at Medusa straight on to see her. She's not deadly. She's beautiful and she's laughing." - Hélène Cixous 'The Laugh Of Medusa'

Disco Dining Club and Chef Draden Medina welcome you to Medusa's Profane Midnight Rouse...a deviant feast for the delectably damned celebrating Disco Dining Club's 5 Year Anniversary. This 2-night, 50-person an evening dinner experience re-writes the ancient tale of the cursed Medusa, allowing her prowess and power to take centerstage. Welcome to her world, where diners must play by her rules. February 14th and February 15th in Downtown Los Angeles.

A 5-course meal from the famed Chef Draden Medina

Live performances from the dancers of Jolene

Demonstrations and kink-driven moments from The Justine Cross

And featuring florals from Under New Mgmt

Tickets are extremely limited. We recommend reserving your seat today.

All sales are final, non refundable.

a little about Disco Dining Club...

Disco Dining Club is a thematic food and drink event that revels in all the excess, debauchery, and hedonism of disco. It is the belief of Disco Dining Club that there were moments of decadence throughout history that led to the ultimate decadence: disco. Whether a historical era, an artistic movement, or an iconic piece of culture, Disco Dining Club recreates these colorful moments through the lens of a theatrical dinner party. At Disco Dining Club, we ask but one thing of our guests: to consume everything.

"Disco Dining Club invites me in with open arms to a familiar kind of weird I’m ready to lose myself in." - Playboy

a little about Chef Draden Medina...

Raised in Southern California, in the predominantly Latino communities of Huntington Park and South Gate, Chef Draden Medina found cooking as a vehicle for self expression and a time for bonding with his family of Mexican and Salvadoran heritage. Upon observing Draden’s love and natural ability in the kitchen at an early age, his Grandmother Mamaya, the matriarch of his family, encouraged him to continue honing his already promising skills. Draden went on to receive his training at the prestigious California Culinary Institute in San Francisco and The Arizona Culinary Institute in Scottsdale, where amongst an exposure to a wide array of worldly fare, he received specialized training in Mediterranean, Italian and Classic American cuisine. Fresh from culinary school, Draden moved back to Los Angeles and began working as a prep cook at Boca Restaurant located inside The Conga Room at L.A. LIVE. After working hundreds of hours doing monotonous prep work in dozens of kitchens, Draden got his big break when he was asked to cater a private event for a friend. This event lead to numerous referrals and since then Draden has catered to legendary rockstars, the Beverly Hills elite, and a growing list of private clients. In addition, he has catered many celebrated events such as the Los Angeles Zoo’s Annual Beastly Ball, The Pacific Design Center’s Fall Market Week, and both the opening and closing weekend events for the Sundance Film Festival.

Until February, please continue to consume. everything.