The Berkeley Alembic , Berkeley [All Ages] 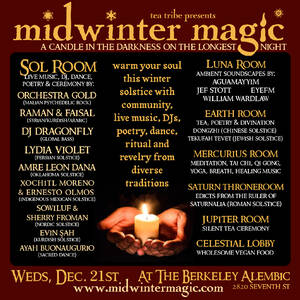 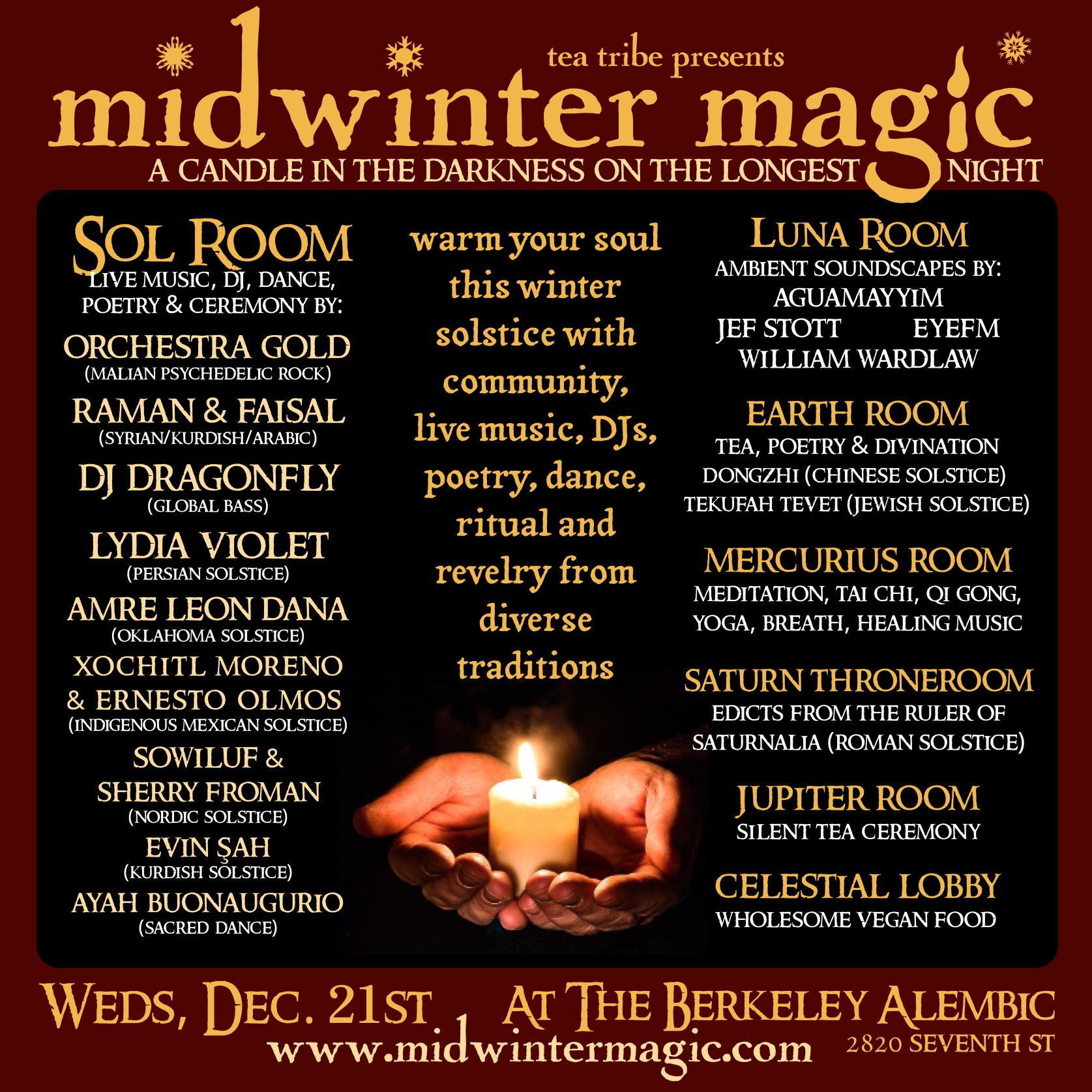 A CANDLE IN THE DARKNESS
ON THE LONGEST NIGHT

AT THE BERKELEY ALEMBIC
2820 Seventh St, Berkeley, CA 94710
Large parking lot at the venue. No shuttles. 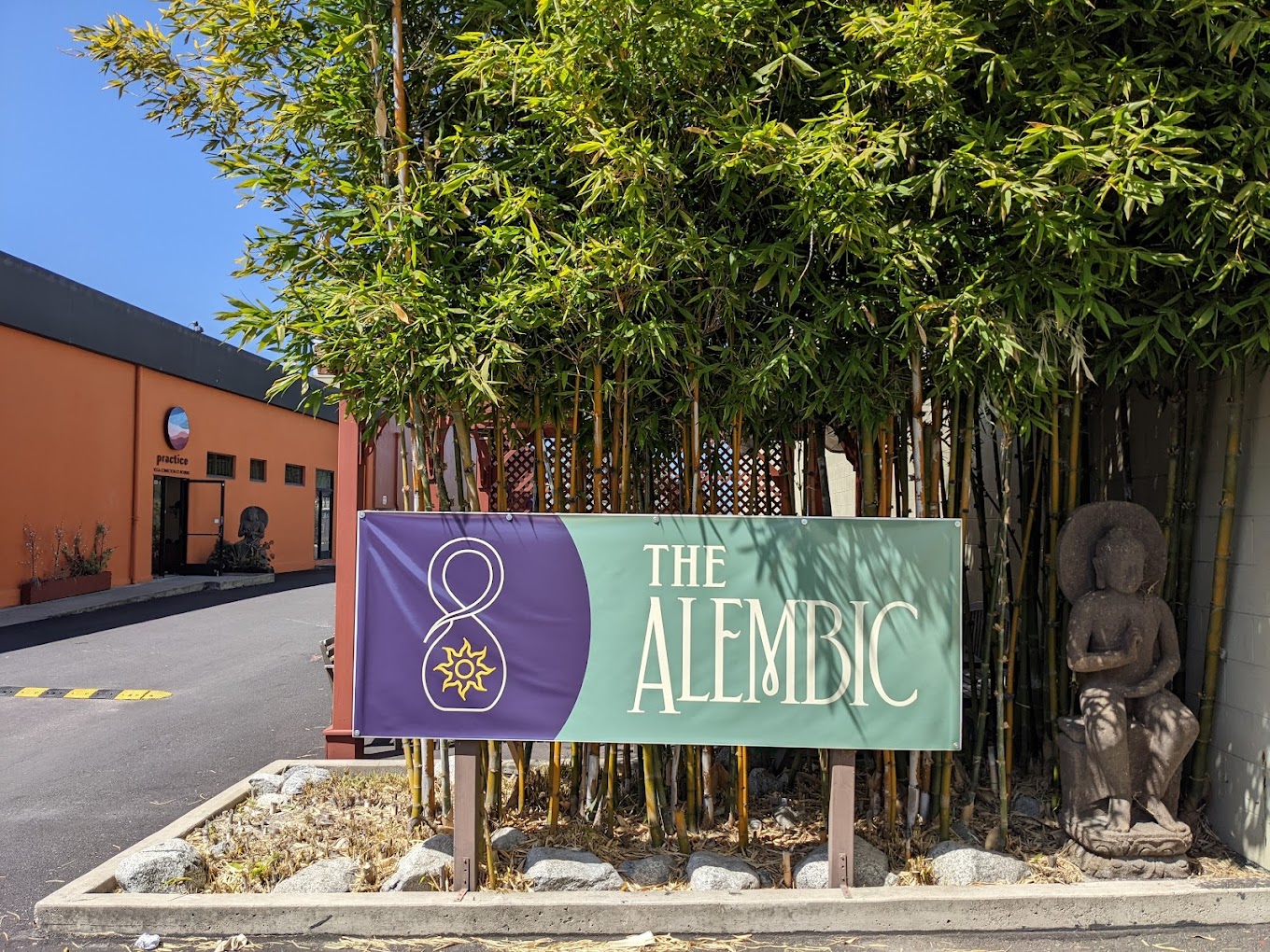 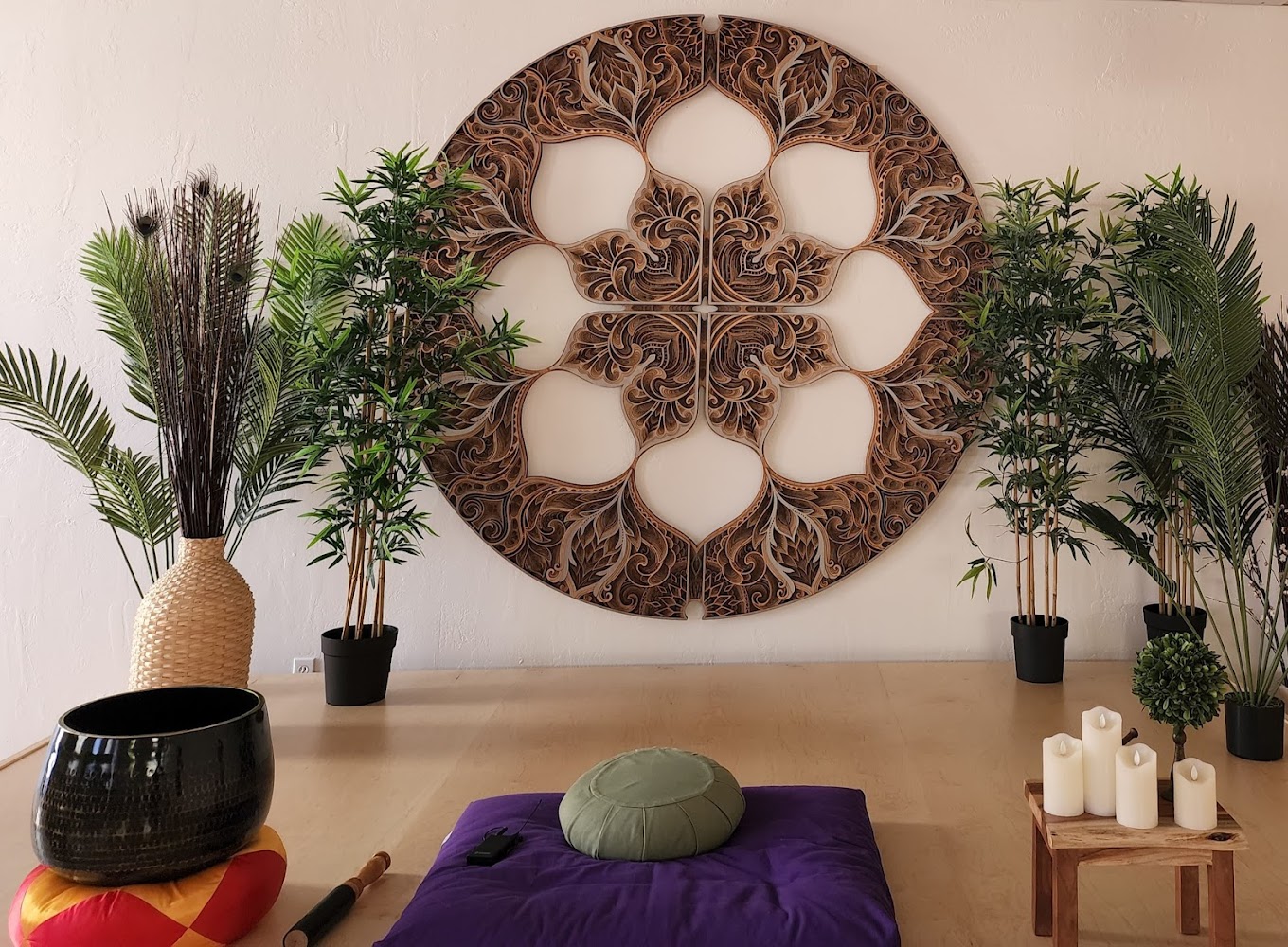 The Winter Solstice is the shortest day and longest night of the year. It has been celebrated in various ways globally since ancient times. At this gathering we honor diverse traditions of ritual, reverence, reverie and revelry.

FREE GOURMET TEA SERVICE
WHAT TO BRING
Your open mind, kind heart, and playful spirit.
Fruit and nuts for the Shab-e Yalda offering.
Offerings to place on the Solstice altar.
Gifts to give for Saturnalia.
DRESS UP IDEAS
Sun deity, the Sun, the moon, stars, the night sky.
Natural materials, evergreen branches, laurel, ivy & mistletoe.
Gnomes, sprites, fairies, nymphs, and elves.
Pileus hat - a conical felt cap traditionally worn during Saturnalia.
No shoes inside venue so be prepared to remove your shoes.

7:15pm: Şeva Zistanê (Kurdish Solstice) with Evin Şah
The Night of Winter (Kurdish: Şeva Zistanê) is a winter solstice holiday celebrated by communities throughout Kurdistan on the Winter Solstice. It is seen as the night before a victory of light over darkness and signifies a rebirth of the Sun. Kurdish musician Evin Şah will share traditional songs and talk about this tradition.

8:00pm: Yule (Nordic Pagan Solstice) with Sowiluf and Sherry Froman
Yule is the Nordic pagan winter solstice. Sowiluf is a Celtic Nordic Pagan who practices Nordic Galdr, Nordic incantation singing and divination. Sherry Froman is a certified minister for the Church of All Worlds and sabbat ritual leader for Harbin Hot Springs. They will be performing a pagan ritual for Yule, embracing the darkness of the solstice and calling in the light through a Nordic song and a narrated ritual.

8:45pm: Shab-e Yaldā (Persian Solstice) with Lydia Violet
Yaldā Night (Persian: shab-e yalda) is an Iranian winter solstice festival, also celebrated in Armenia, Afghanistan, Tajikistan, Uzbekistan, Turkmenistan, Azerbaijan, and other countries. It was a night in which Ancient Iranians celebrated the deity of light, Mithra. On Yalda Night, family members get together and stay awake all night long. Fruits and nuts are eaten, especially pomegranates and watermelons. Prayer is offered. Poetry and mythologies are read aloud. Faal-e Hafez (Hafez Omen) is a Yalda night tradition, added in recent centuries, in which the poems of Hafez, the 14th century Iranian poet, are used for divination and read aloud. Lydia Violet will lead the Shab-e Yaldā and share Persian songs and poetry. There will be a spread of fruits and nuts. Poetry-sharing will continue in the Saturnalia Room.

9:30pm: Saturnalia Coronation (Roman Solstice)
Saturnalia is an ancient Roman festival in honour of the god Saturn. Romans spent Saturnalia partying, gambling, singing, playing music, feasting, socializing and giving gifts to one another. It was a time when the ordinary rules were turned upside down, and social roles were inverted. Men dressed as women and masters acted as servants. A common custom was the election of a "Ruler of the Saturnalia", who would preside over the merrymaking and give orders to people, which were to be followed. "Yo Saturnalia!" was the characteristic shout or salutation of the festival.

11:15pm: Lava Lotus (Fire Arts)
Lava Lotus will offer a fire arts performance outside, driving out the darkness with her fiery spirit.

11:30pm: Birth of Huitzilopochtli (Indigenous Mexican Solstice) with Xochitl Moreno & Ernesto Olmos
For the Nahuas (“Aztecs”), the winter solstice was the first day of the Panquetzaliztli, and the birthday of Huitzilopochtli, lord of the sun and patron god of the Mexica. Ceremonialists and musicians, Xochitl Moreno & Ernesto Olmos will lead a fire and water ceremony and ofrenda honoring the 7 sacred directions and the birth of the sun in the south, Huitzilopochtli. Limpias and flower blessings offered.
Midnight: Orchestra Gold (Malian Psychedelic Rock)
It’s 1976 and you just stepped inside a smokey club in Bamako, Mali. The air is thick with the gritty analog sounds of funky folkloric music, psychedelic guitar swirling with jazzy horns and hypnotic bass. As the crowd shakes their bell bottoms to the infectious grooves, the singer commands the stage with her soulful vocals and dance moves that give James Brown a run for his money. This is the vibe that Oakland’s own Orchestra Gold creates in their live shows as well as their recordings.
1:30am: DJ Dragonfly (Global Bass)
Dancefloor-ready, open-format, underground-inspired and high-vibration, Dragonfly infuses the sonic depth of bass culture’s boom with globally inspired rhythmic mysticism and sacred morphology.

8pm: AguaMayyim
AguaMayyim is a collaborative music project between Rose and Franky Garcia, born out of their deep love and mutual passion for the healing power of sound. Together they DJ, lead breath work and sound healing gatherings, and produce EDM & ecstatic dance events in Santa Cruz, CA.

10:00pm: William Wardlaw
William Wardlaw is a veteran Bay Area ambient DJ associated with As You Like It and a regular at Chillits and Ambient Awakening events.

11:30pm: Jef Stott
Composer, producer and performer Jef Stott has been deftly navigating the realms of world fusion music for nearly two decades, where he has consistently been at the forefront of the International Global Bass movement. Check out his recent ambient music here.

All Night: Gong Fu Tea Lounge
Sit and enjoy fine teas served to you ceremonially by our charming tea servers.

Dongzhi Celebration (Chinese Solstice)
Dongzhi, the Chinese Winter Solstice Festival, is celebrated in China, Hong Kong, Taiwan, Japan, Vietnam, Korea and other East Asian countries during the winter solstice. The origins of this festival can be traced back to the yin and yang philosophy of balance and harmony in the cosmos. It is believed that the longer daylight hours after this celebration create an increase in positive energy flowing in. The philosophical significance of this is symbolized by the I Ching Hexagram 24: ䷗ Fù (Returning). To celebrate Dongzhi, we will have available the traditional dish tangyuan (湯圓) or balls of glutinous rice, which symbolize reunion. There will be a handout on Counting the Nines of Winter (Shu Jiu) - a way to use the number 9 to get through the 81 (9x9) days of winter until spring begins. You start counting on the day of winter solstice. There will be a plum blossom painting exercise and Chinese poetry that accompanies it. There will be I Ching readings offered and instruction on how to read. The I-Ching is an ancient Chinese divination text that is among the oldest of the Chinese classics.

8:45pm Tekufat Tevet and Hanukkah (Jewish Solstice)
Tekufat Tevet is the Jewish winter solstice, the beginning of winter, or "et ha-ḥoref" (winter-time), when the night is the longest during the year. Hanukkah is called the Festival of Lights and occurs during a dark moon nearest the winter solstice. This year it falls directly over the Solstice. Each night throughout the eight-day holiday, a candle or oil-based light is lit, in rememberance of a magic lamp that miraculously burned for 8 days.

9:30pm Shab-e Yalda Poetry Sharing
To celebrate the Persian tradition of Shab-e Yalda, participants practice poetic bibliomancy, reading aloud divinitory mystical poetry.
We will have copies of Hafez's books in English and Persian. Feel free to bring your own mystical poetry to share.

7pm: 3 Treasures Qigong by Herbal Thom
This is one of the most ancient and palpable forms of qi cultivation that nourishes our 3 major energy centers of Jing, Qi & Shen (essence, energy & spirit). Herbal Thom began teaching with Supreme Science Qigong and has toured the country training instructors since 2006.
8pm: Embodied Meditation by Teya Valentina Chavez (Peruvian Solstice)
Teya Valentina Chavez is a Curandera through the Peruvian lineage of her ancestry and the creator of Visionary Leadership Embodied Wisdom Path. Together we will create a Sacred Container through the medicine wheel, embark on embodied meditation journey to honor the prophecy of the condor and the eagle. The Peruvian tradition of Qhapaq Raymi/summer solstice in the southern hemisphere and the Winter Solstice here in the Northern hemisphere will be celebrated as we bridge, unite and harmonize these polarities of feminine and masculine energies so that we may be of greater service and living in balance.
9pm: Inner Light Voice Activation Portal by Sean T. Fox
Welcome back the fullness of your Inner Radiance with the Power of Sound as we move through this portal of the darkest time of year.  Join Acupuncturist, Qigong Wizard and Sound Healer Sean T Fox on a Journey of Voice and Vibration to align the inner lights of seven chakra centers and unlock resonant keys of vibration from within our Beings. In this space of Harmonized Hearts and Freedom of Voice we will Listen Deeply to allow Spirit Songs, Ancestral Melodies and Light Language to inspire our Infinite Potential through Sound.

10pm-3am: Meditation & Silent Tea Ceremony
No talking will be allowed in this room.

Receive orders from the Ruler of Saturnalia
Go on quests to earn a Pileus hat.

There is a large parking lot at the venue. No shuttles.