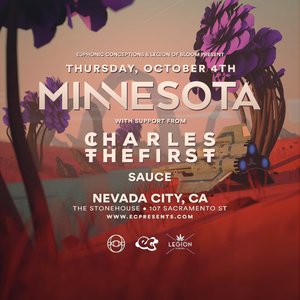 Euphonic Conceptions & The Legion Of Bloom present:
Adventures through space and time w/


Trying to build a successful and healthy music career in an environment as complex and competitive as the music industry isn't always easy. Trends come and go, and it's only natural for the majority of artists to try and follow them in order to keep their relevancy high. That is definitely not the case for Minnesota however, as he has managed to sustain a highly successful and year-long career by not paying attention, and absolutely doing himself.

Puting his own twist as bass music, the Berkeley producer has put out various EP's and is constantly performing across the US; also playing festivals such as Electric Forest, Imagine Festival and Wobbleland.

Having not released a concrete body of work since his stellar Voyager EP, which dropped almost 4 years ago, the time had come for Minnesota to bless fans with his latest long-awaited EP. Released on Wakaan, Curio EP spans 5 heavy tracks in length, and according to Minnesota "...my favorite EP I have ever produced..."

As with pretty much everything Minnesota releases, Curio is a journey from start to finish. The dreamy "Edge" sets the mood before exploding into a melodic drop, that still manages to twist itself into mayhem for its second half. "Techniques" and "Desert Diamond" bring another healthy dose of bass, and while the former utilizes in a darker sound, the latter does it with finesse, introducing a middle eastern vibe that perfectly blends with the distorted synths and plucks that follow. A VIP version of "Hilow", one of Minnesota's previous release, closes off the EP on an atmospheric note.

Fusing his organic hip hop roots with lush and experimental electronic composition, CharlestheFirst has developed a danceable style steeped in dreaminess and pyschedelia. Born in 1996 in the Sierra Nevada mountains, Charles has been heavily influenced by nature and the adventure that coincides with it.