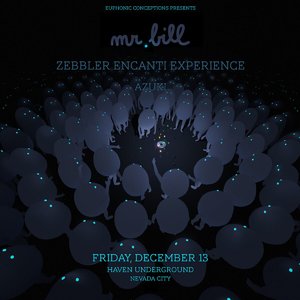 Mr. Bill has been a leader in the audio production world for years. Beyond producing dazzlingly intricate originals, remixes, and collaborations with other stars of the industry, his eagerness to share his massive library of technical know-how has made him just as sought-after for studio work as he is for highly energetic and crowd-pleasing live performances.

Mr. Bill has toured North America and Australia with a live drummer, supported Beats Antique on multiple U.S. tours, and has played major festivals around the world. He scored the Nicolas Cage horror-comedy MOM AND DAD, and his techno side project Electrocado was signed to deadmau5’ mau5trap label for a multiple EP contract. Mr. Bill released his IDM album, Apophenia also on mau5trap, as well as the collab “10.8” with deadmau5 featuring an epic animated video by Bill’s longtime artist, Funilab. Mr. Bill also released a collaborative EP with Esseks, DeadLanguage on Ganja White Night’s Subcarbon label, and has current and future collabs slated for release on Deadbeats, Wakaan, and even more labels this year.

Zebbler Encanti Experience (aka “ZEE”) is an audio/visual collaboration between video artist Zebbler and electronic music producer Encanti, based out of Boston, USA and Valencia, Spain. The Experience is an immersive performance of mapped visuals on three custom winged projection screens, synchronized with heavy peak-hour psychedelic bass music, resulting in the creation of a fantasy world for audiences to lose themselves in.

ZEE have seen a considerable amount of road time in the last few years, serving as integral members of multiple tour teams. The architect behind the projection mapped projects for Shpongle and EOTO, and assisting with Infected Mushroom’s stage construction, Zebbler has toured the United States nonstop producing visual shows and performing as a VJ at hundreds of high profile events. In addition to ZEE performing as direct touring support for EOTO in venues throughout the country, and performing in Shpongle Live band during their first few shows in the United States, Encanti has carved out some time to teach electronic music production to graduate students in Valencia, Spain wing of Berklee College of Music.