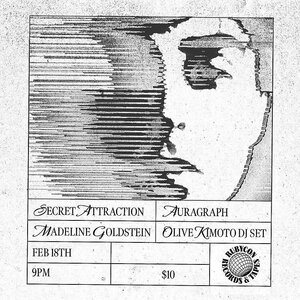 "A night of ethereal, glistening sounds ranging from lofi shoegaze, to hauntological vaporwave. Plus, yours truly will be laying down dreams on the decks

Following the debut EP, Desire, Secret Attraction has only furthered its expertise in developing lo-fi, dream-like sounds accompanied by hushed, soporific vocals. Each track dissects complex emotions and provides them an original, yet personally recognizable voice. The impressionistic tracks of Secret Attraction create an atmosphere for listeners unlike any others in the lo-fi pop realm.

An experimental synthesizer-based project by Texas born Hector Carlos Ramirez, based in Los Angeles, California. Carlos played in several bands within the hardcore and punk scene in Laredo, Texas, before a move to Austin prompted his fascination with synthesizers and samplers.

Madeline Goldstein, front person of Portland’s infamous and long-running synth pop outfit Fringe Class, breaks though the noise with their new and highly anticipated solo project (self titled). Founded after relocating to LA in 2019, Madeline has now self released a full length album (Forget This, 2020) and their more recent single, Lost In Heaven, showcasing their ethereal dream-pop presence and ever-evolving home production skills. With emotion and a strong ear for pop melody, Madeline Goldstein echos the energies of new wave, dream-pop, shoe gaze and synth wave, all while showcasing the vocal range and passion of femme pop icons of the 80s and beyond.