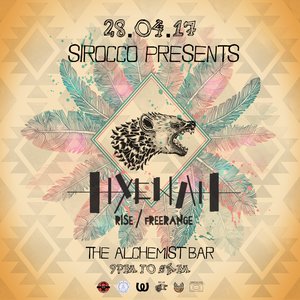 We are quite chuffed to be hosting Rise resident,HYENAH! Currently on his 2017 African Tour and is making a stop in Nairobi,Kenya.

Hyenah secretly sneaked on to the scene in 2014 and quickly acquired an worldwide fan base, spreading its calling across several continents.
Its first track ever “the wish” was already claimed to be the “most unfairly slept over track of the year” by a certain Black Coffee and a sure shot in all his sets. (http://www.theguardian.com/music/2015/jan/31/black-coffee-favourite-tracks)
Preferring to keep its his identity hidden and let the music do the talking, Hyenah has thus far delivered two cutting edge, raw and African inspired Ep’s for Freerange Records. Like both original releases Hyenah’s remix for Frankey & Sandrino on Drumpoet Community frequently made it into the sets of many big DJs like Ame, Dixon, Mano le Tough, Culoe de Song or Jimpster - to just mention a few.
Hyenahs third EP, forthcoming on Dennis Ferrer’s Objektivity label, has just been featured in Black Coffee’s BBC 1 Essential mix and is proving his continuing support for this strange creature.
In 2016 Hyenah started a bimonthly residency at Wategate’s Rise night in Berlin. It already djed in several high profile clubs in Europe, Africa and Asia (e.g. House 22 in Pretoria, Watergate in Berlin, Djoon in Paris, Pacha in Barcelona at the Sonar Festival, Faust in Seoul or Musicbox in Lisbon).

More info on tickets and DJ line up out soon.

Management reserves the right to admission. - Strictly 18+ - Proof of Age will be required! - Only Original ID's /Drivers Licenses/Passports will be accepted.  - No copies of ID's or Passports allowed (unless stamped by immigration/Embassy for passports only). - Student ID's will NOT be accepted. - Tickets purchased by underage persons will NOT guarantee entry and will not be refunded. - Cash and M-Pesa accepted at the gate, no debit or credit cards.

No Bottles, No Weapons, No Drugs.
Go to www.drugfreeworld.org to find out more.