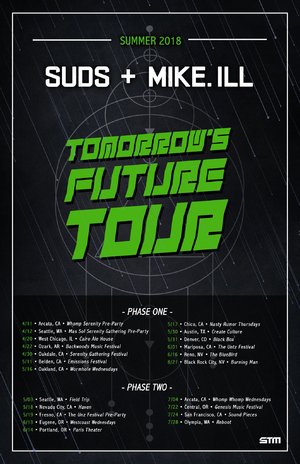 Born out of the smoke, fog, and low end serenity of Humboldt's redwood coast; SuDs has been making quite a name for himself within the bass music community with his signature form of squishy, hard hitting, and mind melting bass music. His hypnotically bass heavy style blends together glitchy textures, dirty saws, and massive subs with an immaculate array of polished organic samples that tap into a warped and psychedelic dimension of future sound that is not easily forgotten.


Mike.iLL is a bass music producer representing the Pacific Northwest from his headquarters in Seattle Washington.
With deep roots in hiphop and dub culture echoing strongly amidst influences from some of todays darkest bass music aliens, Mike has crafted an innovative, grungy, pulse pounding, style that is a definite force to be reckoned with.