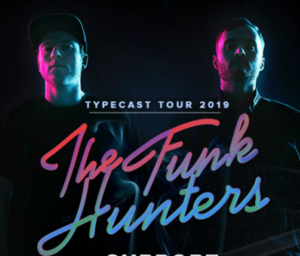 Borrowing inspiration from classic funk and hip-hop, The Funk Hunters are putting the soul back into electronic dance music. Having honed their craft over 500 performances in 16 countries, the DJ duo's show is a brilliant technical display of creative collaboration between 4 turntables. But words can't do justice to two friends whose passion is dance floor mastery – breathless audiences at global festivals including Coachella, Osheaga, Burning Man, Rhythm & Vines, Shambhala, Electric Forest, and Envision are the ultimate testament.

The Funk Hunters' reverence for the roots of dance has led them into unique collaborations, sometimes drawing on a cast of supporting musicians to add dimension to their signature sound. They have toured North America with iconic rapper Chali 2na of Jurassic 5, who called them "the selectah's of the century," and they have collaborated on official remixes for Selena Gomez, Imagine Dragons, Big Gigantic, and Gramatik. The Funk Hunters’ music has amassed over 10 million streams to date across the major streaming platforms.

The Funk Hunters are now preparing to release their debut full-length album, TYPECAST, in early 2018.

Based in Vancouver BC, Nick Middleton and Duncan Smith define the west coast bass sound and elevate it with their stunning custom-curated visuals and animated stage presence. Spend an evening with this charismatic duo and you'll see that the band's lifestyle is as relaxed as the west coast, but their sound is global and booming.