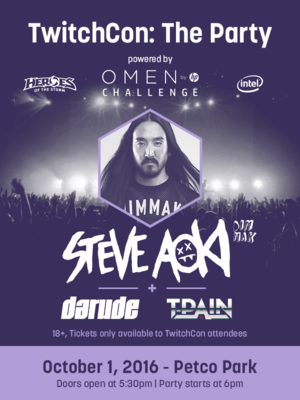 Powered by HP “Heroes of the Storm” OMEN Challenge

Join us at Petco Park for TwitchCon: The Party, a massive celebration with all your Twitch friends and streamers, world-renowned DJ, Steve Aoki, and special guests Darude and two-time Grammy winner T-Pain!

The party kicks off with the HP “Heroes of the Storm” OMEN Challenge, where four teams of five gamers will compete playing Blizzard's Heroes of the Storm while in an enclosed gaming chamber for a chance to win the U.S. HP OMEN Challenge Championship. The enclosure will test gamers physical agility and skills by introducing various elements into each chamber pod such as wind blasts, cold environments, and more. The chamber pods will artificially simulate a pseudo-torture environment and further challenge gamers during the championship. Torture elements will be revealed to both the live and online Twitch audience via spectacular animations emanating from a giant LED tower.

First 1,000 attendees to arrive will receive a free slice of pizza and soft drink, sponsored by HP "Heroes of the Storm" OMEN Challenge!

TwitchCon: The Party featuring Steve Aoki with Darude and T-Pain