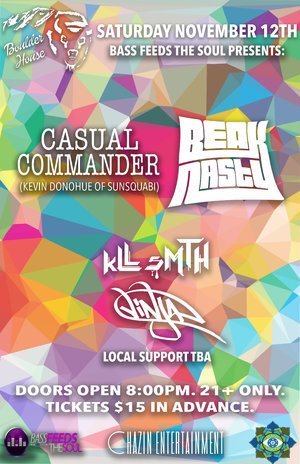 Sponsored by Chazin Entertainment & Many Visions

Beak Nasty (Ryland Sabien) is a multi-instrumentalist/producer/DJ that combines the sounds of hip hop and intense bass lines to create futuristic chill funk/electro soul music. When he moved out of his small Wisconsin hometown at age 16, he immediately got involved with the Minneapolis hip hop scene by producing and DJing for the likes of Future Fossils (formerly Kids Like Us), Allan Kingdom, and many others. At age 17, he began attending McNally Smith College of Music and performed nearly every stage in the Minneapolis/Saint Paul area. It was not long until he rose up in the local scene and began working full time on his solo career releasing "When it Rains, it Pours" in 2011 and "The Expanding Universe" in 2013 along with other singles and remixes. Shorty after the release of his third album "Chill Funk Files Vol. 1" in July 2013, Beak Nasty combined forces with Florida percussionist Foxy Dope (Phil Ade). Together they got booked all over the midwest from small venues to large festivals showcasing their unique performance with Beak on vinyl turntables and Foxy on an electronic drum kit. In August 2015, Beak Nasty released his 6 track EP "The World Is Real" and moved out to Colorado with Foxy Dope in hopes to spread the funk far and wide.

"Beak Nasty has been working hard for only being 21. Between his prolific skills in instrumentation, and his eclectic taste in music, Ryland Sabien has begun to find his voice as a producer. He is downtempo but uplifting, old school funk but futuristic, melodious but bass-heavy. “The World Is Real” is a fantastic collection of Beak Nasty’s range, showing that no genre can contain his creative mind. By no means should you limit yourself to his newest release, however, Sabien has been creating great tracks for years now." - All Good Records (http://www.allgoodrecords.com/articles/beak-nasty-the-world-is-real-ep/)

Casual Commander is a melodic Bass music project created by Guitarist Kevin Donohue of SunSquabi. The music of Casual Commander blends contagious bass music with the quixotic effect that years of guitar playing provide to a musician.

As a diverse performer, Kevin Donohue has spent considerable time on the road with electronic acts that include Big Gigantic, Pretty Lights, GriZ, Murphy of STS9, Up Until Now, Two Fresh, Conspirator, Michal Menert, Boombox, The Floozies, Archnemesis, Break Science, Minnesota, Ghostland Observatory and many more.

Casual Commander is a newer project from Kevin that is beginning to take shape with momentum stemming from SunSquabi. Look for more music and live performances from this Casual Commander in 2015 and beyond.

Like a prismatic audio avalanche ripping down the mountains of Colorado to ears all around the world, kLL sMTH has stayed vigilant in his mission to keep the heart in the bass and the bounce in the booty. Cruising powerfully through gut-wrenching lows to illuminated peaks (and occasionally stopping off in sexy-time), his music paints an inspired portrait of an ecstatic dance-floor.

Vinja has been cultivating a catalog of dance floor friendly tracks since the turn of the century. Growing up in the San Francisco Bay Area, the producer was exposed to a thriving electronic scene and witnessed the birth of the West Coast bass revolution. Blending dubstep, drum and bass, glitch-hop, breaks, and electro, with heavy references to the golden age hip hop of the 80’s and 90’s, Vinja’s style is reminiscent of the rich musical culture of San Francisco's past and present. Also characterized by his use of 50’s soundtrack music within his multi-genre compositions, Vinja utilizes the eclectic sounds of the yesteryear by re-contextualizing them for today’s modern world. His live DJ performances reflect the many flavors, textures, tempos and genres which inspire his own productions, creating a limitless environment of musical intersections for listeners on the dance floor.

His debut release, the Voyager EP (2010 -- Addictech Records) was mastered by the legendary Dave Tipper. In 2012 Vinja relocated to the mountains of Colorado to create his first full length album, Secret Agents Drink Martinis. Following a tour of Australia in February of 2016 Vinja has been ambitiously working on his second full-length album, which he plans to release in early 2017.