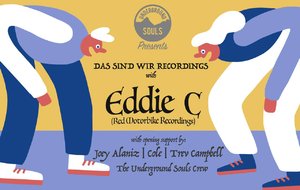 We've been through fire and floods, mudslides and muck so as a treat. Underground Souls is ready to thank you loyal badasses in funky with something special.

Raised in Southern Ontario somewhere between Detroit and Montreal, Eddie C began his experiments in music some time in the late 80s. Inspired first by Hip Hop and the burgeoning Acid House scene, he began making tape edits of late night radio and shortly thereafter began visiting record shops and warehouse parties to discover the music first hand. Record collecting has since been a way of life for the man, followed closely by an opposing passion for skiing which lead him to his 10 year sabbatical in the Rocky Mountains of Canada. With plenty of time over the past decade for reflection and research in his log cabin studio, C has recently re-located and reconnected with the electronic music community in Berlin. His raw yet sophisticated approach to production has yielded countless releases and remixes since just 2009 and his now renowned eclectic and passion-fueled DJ sets have garnered a cult following world wide.

Eddie C could well be described as one of the Slo Mo/ Edits/ Disco scene's heaviest hitters. In just over three years he's featured on or been the main attraction with over 25 original EPs and singles and countless remixes. Having graced labels like Jiscomusic, Endless Flight, Crue-L, Sleazy Beats, Wolf Music, 7 Inches of Love & Home Taping, amongst others, with his deep, lush and beautiful grooves, C is constantly name checked by every major playa this end of the underground. In 2011 he released his first full length album "Parts Unknown" on Endless Flight and later that year began releasing new projects on his own Red Motorbike imprint. The fact is, the guy hardly needs an introduction.

Cole Odin Berggren IS music. When not singing, programming, drumming, and nearly everything else for his electronic rock band, Ownership, he can be found DJing some of the best clubs in SF and beyond. Known for a wide variety of styles, programmed with a musician's ear, and with DJ skills honed over nearly 20 years, Cole has played such bay area clubs and parties as Housepitality, Ruby Sky, Mezzanine, Mighty, The Great Northern and many others, and he currently holds 3 monthly residencies at Monarch, The Eagle, and PhonoBar (formerly Muka) in SF. He's played the legendary club APT in NYC, the rooftop of the Standard Hotel in LA, and is a repeat booking for the Sunset Campout Music Festival. He has also been honored by being asked to play The Do Over in L.A., arguably the world's biggest, funnest day party in LA (and beyond). HIs ability to play all types of sets has led to concert giant Live Nation to hire him in rotation as the VIP room DJ at The Masonic, and in the poster room at The (legendary) Fillmore. They also hired him to play the opening night party in Super Bowl 50's Super City, with a classic rock set opening for Chris Isaak. His extensive musical background has led to other employment such as session drummer and vocalist, blog-writer for Monster Headphones, Om Records, and Stunner of the Month, and music director/head music writer for SEX+DESIGN magazine, where he put his musical knowledge to work planning and DJing huge events, and interviewing artists such as Billy Corgan of Smashing Pumpkins, Cody Chesnutt, Tycho, Public Enemy, Pillow Talk, Matthew Dear and many more. Recently, he's been hired as co-music curator for Future Fires, a Bay Area technology, art, music and fashion event in San Francisco that hosts events of nearly 3,000 people. As his "day" job, Cole is also the Outreach & Community Programs Director for Blue Bear School of Music, a non profit, bay area music school that's been the original school of rock n' roll, since 1971.

His parents would play all types of music throughout the house, growing up. His fathers record collection was eclectic and vast. When he was old enough to get a job, he would spend all of his money on music. Anything from Hip-hop to punk. His older brother was a mobile dj. At the age of 14, Joey would buy records and sneak into his brothers studio when he was gone and practice for hours. Back then it was all hip hop but when those A. sides couldn’t be played anymore, he discovered the B. side dance tracks and was instantly hooked.

in 1996 he began playing at raves for promoters Bagok Tribe and 6 In Da Morning. When he turned 21 the next thing to do was play the nightclubs. By the time he was 28 he had played most of the major clubs in SF like The End Up, 1015 Folsom, Ruby Skye and Club Townsend. In 2008 he began a 3 year residency at the legendary nightclub, The End Up for the party, Sunday Mass. In 2012 he started his own party named Common Ground at Monarch SF. From there the party has moved to Public Works, Audio, Mighty and Halcyon. During his DJ career he has had the opportunity to play with or open up for some of the biggest names in underground dance music such as Mark Farina, Eats Everything, Steve Bug, Mano Le Tough, Huxley, Metro Area, Inland Knights, Dj Sneak, King Britt, Kenny Dope, Hardkiss Music, Jimpster, Jazzanova, Detroit Swindle, Doc Martin, Wolf + Lamb, Dj Tennis, Ian Pooley, and Marques Wyatt.

Currently Joey holds down a residency at SF’s newest nightclub, Halcyon and continues to do his Common Ground party. In 2016 he joined the DJ collective, Disco Knights, a sound camp at Burning Man that has been running for the last 8 years. If you like what you hear, please follow him on Soundcloud.com/joeyalaniz


Trev Campbell is a DJ and tastemaker hailing from San Francisco.. For the last decade he has spent a healthy amount of time throwing parties and mixing records. Early on in 2013, he and longtime friend Bob Five launched Black Magic Disko, a staple party on the scene that had a rotating door of local and international DJs.

Trev is also founder & primary creative force behind the record label Das Sind Wir, which features releases by the likes of Powel, Death on the Balcony, and Pattern Drama. Currently Campbell is focused on his own productions, putting in a hefty amount of studio time in between the residency that he keeps at San Francisco’s Halcyon night club. His penchant for a self described “warm house” sound and youthful years exploring techno and acid house all converge when he is in the booth or on late nights in the studio. Das Sind Wir pushes onward with 2018 shaping up to be an impactful year packed full of new music ready to unleash your inner rave child, with Trev moving internationally and bringing the spirit of San Francisco far and wide.