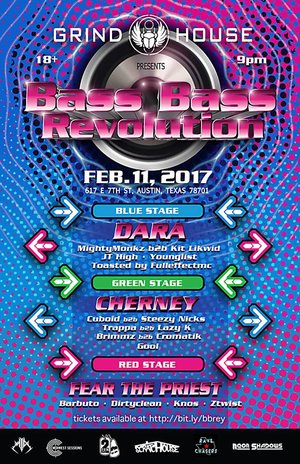 This fusion event pays homage to classic styles of dance music like house, techno and drum and bass, while incorporating Heavy bass music like dubstep and riddim. With 3 massive lineups and tons of suprises BBR is sure to be an unforgettable night!

Artists for the Evening

A member of the infamous Planet of the Drums crew alongside fellow drum ‘n bass pioneers AK1200, Dieselboy, & J Messinian, this Irish transplant has been a dominant figure in the U.S. drum ‘n bass scene since his arrival here in 1994. His discography includes 2 critically acclaimed full length artist albums, 8 DJ mix CDs, as well as numerous singles and remixes for artists such as Freq Nasty, Afrika Bambaata and Keoki. Along with DJ DB, Dara co-founded the nation’s first & largest drum ‘n bass record store, Breakbeat Science, in NYC which doubles as his own imprint, Breakbeat Science Recordings. He has been featured in countless magazine articles and interviews both in the US and worldwide. He previously hosted one of the internet’s most popular drum ‘n bass broadcasts, Velocity, where he regularly interviewed leading drum ‘n bass artists such as Jonny L, Kemistry & Storm, Trace, Ed Rush, Optical, Hype, Andy C, Zinc, and many others. Dara’s long standing relationships with the world’s drum ‘n bass elite gives him access to an astounding amount of new and unreleased material. His brilliant recording endeavors along with his incessant touring marked by consistently awe-inspiring DJ sets have made him one of the most recognized and well respected DJs in the country.

From the age of 13, Joshua Cherney has been carefully mastering the art of production. What started out as a hobby, infused with relentless hours of hustle, and true passion, his creative project, Cherney was born. With a fan base growing by the masses, Cherney, has continuously taken the scene by storm with no plans of slowing down. Known for his hard-hitting beats, heavy dubstep influence, and barrier breaking sounds, it is no surprise that hit after hit has been a massive success for the rising producer.
Synonymous with high energy, anticipation, and always keeping you on your toes, a Cherney set is always sure to leave you wanting more. From playing mainstage at Voodoo Experience Music Festival in New Orleans, Louisiana, to gaining support from artists such as Excision, Flosstradamus, Yellow Claw, and more, Cherney’s talents expand beyond stage and into the studio. Mixed with a strong fusion of trap, dubstep, and rock elements, Cherney is known for shattering genre barriers, while maintaining a sound unique to his own.
On stage, Cherney proves an aura unlike any other, leaving fans captivated appearance after appearance. It is guaranteed that a Cherney set is sure to leave you sweaty, sore, and wanting more, as he carefully curates each set to a maximum level of energy. With music that leaves you wide eyed, and a drive incomparable to many, there is no place but up for this young producer.

The location was Sydney, Australia. An influential member of the techno monarchy was born. His skill set and musical prowess would be discovered over 20 years later upon relocating to Austin, Texas. It was here, in the live music capital of the world, where industry protégé Christian Barbuto would fully realize his creative ability and duty to the underground.

It didn’t take long for Barbuto to righteously find his place at the forefront of Austin’s club circuit. One may say the stars had aligned with the opening of Kingdom Night Club, Barbuto found himself standing tall in the DJ booth, further refining his skills behind the decks. A venue that’s been touted by world class techno talent as one of the best clubs in the country to play, Kingdom Night Club is a techno arena and Barbuto is the undefeated champion.

His ever-evolving sound remains loyal to the dark, bass-hungry attributes of techno. Watch in awe as Barbuto's sets cast a spell upon the dance floor. Weaving crowds in and out between moments of deep, infectious groove to minimal modulation, he approaches each performance with intellect and vivacious energy. Keeping audiences transfixed for hours upon end, Barbuto sets the bar for all others to strive for.

Christian Poulsen has been involved in music making since 1994 when he began to write and play drums and guitar. In 1995 he joined FACE DOWN (ska, punk) as a guitarist and contributing writer. In 1996 Christian formed JFK (rap,metal,hardcore,noise) continuing his role as a guitarist and primary song writer. At the same time Christian was often found behind a set of drums playing for his churches worship team. Upon leaving his hometown of Pembroke, ON for the big city of Toronto Christian found himself quickly emersed in the electronic music (particularly rave music) scene and decided to take up one of his passions (djng) full time. From 1997-2008 Christian dj'd at countless underground raves across Canada and some northern US States under various names such as Strik 9, Rex Manning (with Mike Conradi) and most notably Dj Unabomber. Christian went on to release a few hard techno and hardstyle trance tunes under that name. About 4 years after the birth of his daughter he changed his name officially to Hugsnotdrugs in 2009. From 2009-2014 Christian worked with a variety of talented individuals who were in/out members of Hugsnotdrugs illustrious and infamous lifespan. The one constant however was Andrew DMT Damato who was not only a contributing producer in many of Hugsnotdrugs most popular songs and albums but an inspiration to Christian to expand his musical boundaries and try everything (musically) at least once. However, Hugsnotdrugs eventually ran its course and Christian decided it was time to return to his less experimental roots... techno music. In early 2015 Christian announced that Hugsnotdrugs would be parting ways and its many members would be pursuing their own individual projects. For Christian, that would become Fear The Pries†.