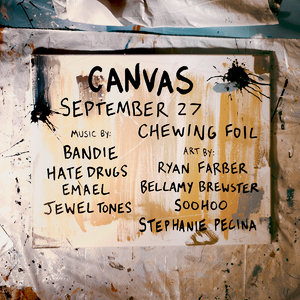 Join us in Los Angeles on September 27th at Chewing Foil.

Want to make your money back? Here's how ticketfairy works:

When you purchase a ticket, share the link provided at checkout with your friends. When they purchase using your link, you get some of your ticket refunded; up to 100% of the cost!

Bandie is a fuzzy garage pop project started by drummer/guitarist Brian Hill in Los Angeles, CA. With a growing collection of energetically sincere songs, including some freshly released singles and an EP on the way, Bandie is here to hum along to. Bandie is also Brian’s dog’s name.

HATE DRUGS hails from the whimsical farm village of Bakersfield, California. They enjoy making music and can be found on occasion playing soccer with the children at the local park. They have been making music together for the last 5 years and have spent a lot of that time in a van, on the way to or from shows. They are now in the midst of creating their grandest piece yet.

Shapeshifters of the organic and electronic, EMÆL is an eclectic group that has converged many genres of music ranging from their classical roots to indie/alt-pop influences. EMAEL's sound is described by EARMILK as "grounded by both atmospheric and classical arrangements carried by fluid rhythm structures and a versatile cello with piercing yet soothing verses." Today this 5-piece continues to enthrall as innovators by construing their sound with avant-garde and chamber pop arrangements.

"How did this pen become such a lens into my fears?" ponders multi-instrumentalist and singer Jacob Millar in the single 'I Won't Fight Anymore'. It seems introspection comes naturally and has become the theme for Millar's lyrical content in Jewel Tones; the project he started on his laptop in 2016. Originally releasing electronic productions, Millar began to feel tied down and limited by the DJ'ing-based live performances and began to experiment with full band productions. After a few years of trying out different line ups for the group, Millar finally connected with Max Greenhalgh on bass and Ross Hodgkinson on drums. The 3 piece then recorded and released the single 'I Won't Fight Anymore' and began working on a full length EP. After playing a few shows around LA at the Echoplex, Hotel Cafe, and The Study in Hollywood, the band decided to go their own route and curate their own show at a venue of their choice. Partnering with Make Out Music, this became the idea for 'Canvas'.

Bellamy Brewster is a visual artist based in Los Angeles specializing in photography, design, and film. His minimalistic approach to creative projects frames his subjects and works to showcase them in their most true and raw form. In 2015, Bellamy moved to New York to attend NYU and pursue visual art. In 2018 Bellamy moved to Los Angeles, working creatively on various artists’ projects at major labels. Bellamy Brewster has worked on projects for Abercrombie & Fitch, AFROPUNK, Dior, Milk Makeup, and Versace Versus and his work has been featured on Milk Paper Magazine, Vogue, V Man Magazine.

Stephanie Pecina is a LA based abstract painter who pulls from past and present experiences to create a visual language using shapes and color. Painting is a release of feelings, thoughts, and emotions that she lets flow naturally, giving little to no forethought into the process. Every mark, gesture and color is a jumping off point for the next- creating a playful rhythm that continually builds upon the next. She creates to connect with her personal experiences, surroundings, and of course, her love for color.