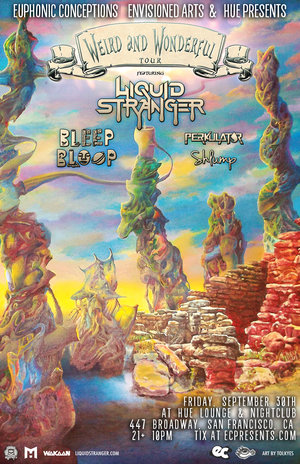 Traveling the uncharted terrains of sound, Liquid Stranger’s creative output spans a wide range of electronic music in all of its colours and Shades. Always pushing the sonic boundaries and merging genres, he consistently creates an ever-evolving blend of unique atmospheres and cutting edge grooves.

With 4 highly acclaimed full-length albums under his Liquid Stranger moniker, this multi-talented producer has established himself as the epitome of trans-national dubstep, covering everything from Latin, Asian, Eastern European and Jamaican Dancehall dubs. His first two albums, ‘The Invisible Conquest’ and ‘The Intergalactic Slapstick’ (Interchill 2007 & 2009), generated a substantial buzz with DJs and listeners alike while his next two albums, ‘The Private Riot’ and ‘Mechanoid Meltdown’ (Rottun Recordings 2010) made a firm imprint in the dubstep community worldwide, topping the download charts for over a month. With several additional remixes bearing his signature touch, the Liquid Stranger sound is in high demand as it continues to reach increasingly wider audiences.

Performing live, the Stranger has a passion for the unexpected and hits the stage with a stash bag full of devastating dance-floor monsters. Using custom built analogue gear to remix his tunes in real-time, he delivers an energetic and infectious performance unique to every show. Major gigs to date include such world renowned festivals like; Voov Experience, Boom Festival, Roskilde, Samothraki, Vortex and Club Boom to name a few. At the moment, he is one of the most sought-after US-based dubstep producers and is in constant demand from coast to coast.