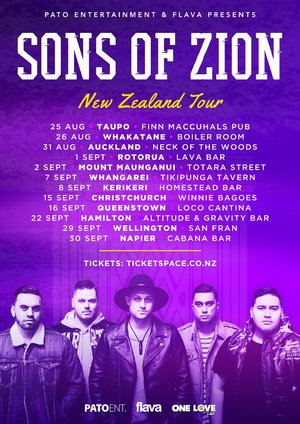 One of New Zealand’s most epic live acts, Sons of Zion, is back on the road this winter for a nationwide tour that takes in both the North and South Islands.

Presented by Pato Entertainment and Flava, the 12-date tour kicks off in Taupo on August 25 at Finn Maccuhals Pub and winds up in Napier at the Cabana Bar on September 30.

The tour follows the recent release of the Sons of Zion’s latest EP, THE JUKEBOX SUITE, which includes the catchy ‘Live It Up’ and current single ‘Is That Enough’ feat. Aaradhna, which hit Top 5 on iTunes and #3 on NZ’s Viral Spotify Chart.

Tickets on sale this Wednesday August 2 at 7pm from www.theticketfairy.com
TopInfluencers